Most people know that June is PRIDE month. I mean how could you not realize it with every single company going rainbow…this is a subject in my life that has caused so much confusion, frustration and eventually appreciation and understanding. I spent many years trying to figure out where I fit into this puzzle among my faith, family and friends. I’m still a work in progress, but aren’t we all?

The first time someone asked me if I was a lesbian was when I was in 8th grade. I had moved to a new town, and kept a picture of my best friend in my binder, because I missed her. Nothing about attraction at all. The guy poked fun at the fact that I was dating (it was middle school so in title only haha) my friends brother. I got really defensive and said “NO, of course I’m not a lesbian!” As if it was something to be ashamed of if I was.

I think it was in this moment that I did decide to not honor any attractions that were not seen as the social norm in small town Wisconsin, or at least try to ignore them.

The first time that I felt attracted to a girl was when I was a freshman in high school. I ignored it and went full force into dating boys the summer after freshman year.

My first boyfriend was an abusive prick that didn’t treat me very well, but it took me some time to realize it and get out. I have some lovely PTSD from this. I struggled with my faith a lot do to some of the circumstances he put me through, and turned to a church to help get me over the emotional damage.

The church that I went to was an Assembly of God congregation with a kick butt youth group. I started dating a guy from my high school that also went to this youth group. The message I would keep hearing is that being gay is a sin, and that we should “hate the sin, but love the sinner.” So I further pushed down my feelings and even got on the bandwagon of “being gay is so wrong, and totally a choice.” I’m sorry about this, as I totally hid behind faith in order to avoid admitting my true self.

By the time I got to college I had snapped out of the damaging “gay isn’t ok” mindset and actually joined the PRIDE group on campus. I always said that I was the “token straight kid” and clung onto being an ally. I knew that I was wanting to go out with other humans in that room that were not cis males, but identified as male. There were also women that I was very attracted to. There was one couple that I spent a lot of time with. C and A were always very patient with me and took time to listen and explain.

In 2009 I moved to NY after a failed engagement, for a nanny job. C happened to live nearby as they were teaching at a university. I was able to visit them one weekend and talk about the years of sorting through my emotions/attractions. That was the first weekend that I ever told someone that I was queer.

I did some more sorting and at the age of 29 I publicly admitted (yay FB) my queerness on National coming out Day. I don’t give my sexuality a specific label, as I don’t find it necessary. I’m attracted to many types of people. I have settled into a heteronormative relationship, and plan on marrying him. Some people think that this means that my non-straightness doesn’t matter, and that I don’t get to talk about not being straight. It’s annoying, but I know my own heart and that’s what matters.

I am looking forward to going to NYC this weekend for PRIDE. I am proud of the woman that I am, and am here to tell you that God made you just the way that God wants you to be. God wants us to love and be loved and to be happy. After so many years of being in churches that went against this, I am glad to have found a Christian community that truly does share a message of love, and to be able to make peace with my true self. 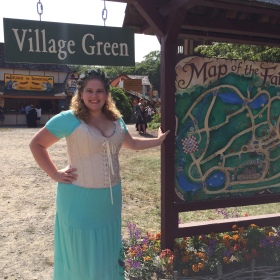